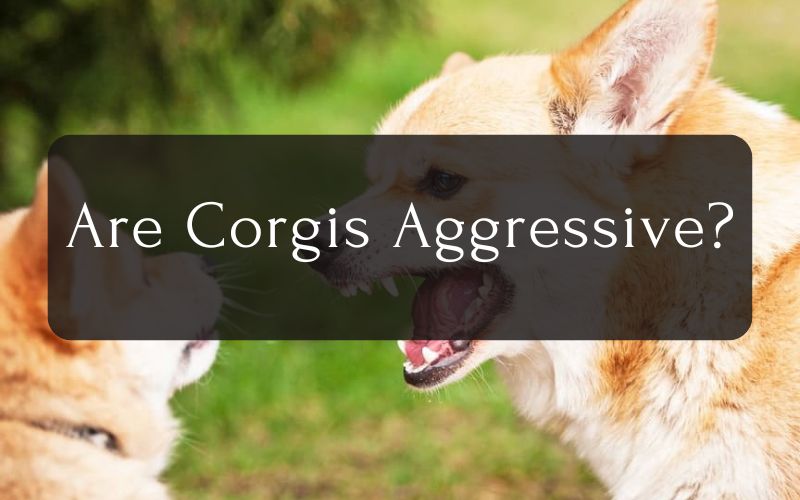 Do you know that Queen Elizabeth raised 14 generations of corgis during her lifetime? People reckon that The Queen has owned more than 30 corgis for over 70 years. This fact explains why corgis are one of the most prevalent dog breeds. When it comes to corgis, people immediately think of their adorable looks with short legs. They are also renowned for being friendly, playful, and intelligent. However, don’t be tricked by their lovely appearance; some could be aggressive. Compared to other breeds, corgis ranked as the most aggressive dog.

Why Are Corgis Aggressive?

Traditionally, people used corgis as herding dogs. Despite their short stature and smaller size compared to most herding dogs of their time, they still managed to do their jobs efficiently. Strangely enough, what seemed to be their downsides turned out to be their upsides. Being smaller and shorter boosted their agility, which helped them not to get trampled by the cattle while herding. For generations, corgis have been adopted as pets and have become tamer than their previous working days. Nonetheless, that doesn’t make the dogs lose their instincts. They have retained aggressive behaviors until this day.

When Does Aggression Start?

Aggression in corgis typically begins at a very young age varying from 6 to 14 weeks. You might notice that they regularly try to pick fights amongst themselves and sometimes mess with your other pets. Therefore, most experts suggest corgi owners train dogs during puppyhood because they are ready to learn new things and absorb obedience. As herding dogs, corgis may develop an alpha complex, so training is essential to let them know that you are in charge. The earlier you start training, the quicker it is to domesticate the pet. One good thing is that corgis are responsive to training since they are intelligent and eager to please. You will probably not have any struggles disciplining them.

How Aggressive Could They Be?

On a scale of 1 to 10, corgis would receive an 8 for their aggression. It is an astonishing score for many people because most of us only know corgis through their cute images on the Internet. However, the original corgis’ job was herding cattle and other farm animals. They tend to be dominant, aggressive, and stubborn.

Common Reasons For Aggression In Corgis

The causes of aggression vary from dog to dog, but some popular explanations exist for aggressive corgis.

Undeniably, physical pain and discomfort typically cause aggression in dogs, not corgis. The dogs might suffer from an underlying medical issue if they are uncharacteristically aggressive. Arthritis, tissue injuries, and brain tumors are common diseases affecting dogs’ behaviors. If you observe any signs of aggression, please get in touch with the vet immediately to prevent the disease from deliberating. They also need to be clean and comfortable, which would carry weight in both balancing corgi’s health.

Dogs are known for their territorial trait. Nevertheless, as corgis still retained some of their instincts, they could become more territorial than most dogs. Everything could be their territories, such as a toy, an outdoor post, and even their owners. This is why most corgis act aggressively when a stranger approaches their owners. However, there is an exception for cats, as Corgis are often good with cats. With this in mind, people often remind a picture of cute Corgis sitting with cats.

Aggression in corgis could also result from frustration – this is known as redirected aggression. It happens when they don’t get what they want. They will behave aggressively towards other dogs or humans. Be careful when controlling them with restraint because they could bite you.

Fear is another reason for aggression in most dogs. At times, corgis could feel frightened and become highly aggressive in defending themselves. Fear is not a common cause, but checking with the previous owner is still necessary. Especially if you got your dog from a shelter, it might be easier for them to be frightened because some dogs grew up in abusive households. However, when Corgis reach an age that stops growing, they will get more even and mature rather than being scared of everything from outside.

To herd the cattle successfully, corgis would nip at their heels to move them in a particular direction. With corgis’ height and size, they would have to be ruthless to do the job, which should explain their controlling nature. As an owner, you must train them to eliminate aggression in time. Make sure to let your dog know you are the boss before they try to herd you and other pets.

Most corgi owners assume that their dog’s aggression stems from this because it mostly happens when you bring a new dog home. Your corgi may not welcome this new friend; instead, it will quickly assert its dominance. The corgi would show the new member who the boss is.

People can spot aggressive behaviors in their corgis easily. Don’t forget to keep an eye on your dog so that you can find a solution before the signs get out of hand. If these signs are not spotted before corgis get into adulthood, they might put you, your family, and others at risk.

While there are numerous signs of aggression, the following are the most common and easily identifiable ones:

When these signs happen, the first thing brings them to join in outdoor activities to become calm and relaxed, giving they some space. Corgi loves swimming, so your dog can take to the water and swim to relax.

There are different levels of aggressive behaviors.

If you bring a new pet into the house, your corgi will likely feel the urge to establish its dominance. This kind of aggression occurs as a consequence of corgi’s territorial behaviors.

Growling and snarling at you or another pet that draws close to their food are signs that your corgi has aggression with food. They could go to any lengths to protect their food bowl, even if it means taking a bite at anyone, mainly when there is food. One of the best ways to eliminate this type of aggression is to let the dog know that you are on top of this house and everything belongs to you. To do this, get your dog to sit nicely, take the bowl, and put the food in it. After that, hold the bowl for them to eat. Please do this several times, and your pet will understand that you are doing it a favor by offering the food.

When your corgi becomes overly obsessed with its claims, such as its food bowl, toys, bed, and even its owner, it means the dog has possession aggression. The obsession might make the dog become over-protective and guard its possessions 24/7. If you approach their possessions, your corgi might snarl or growl at you. To curb this aggression, take the thing that the dog is obsessed with in your hands and shout, “Mine.” Please don’t give the dog the object until it calms down. This way will help the dog to understand who the actual owner is.

Aggression With Other Dogs

Corgis could be aggressive towards other dogs too. Because of their instincts, these dogs don’t fear any dog fights. A way to redirect this aggression is to have your dog on a leash when you are not home. However, this might lead to leash aggression. If your pet feels you are trying to restrain it, it will display this attack. The best measure to leash aggression is to leash-train your corgi well in advance.

As a result of their herding behaviors, corgis show a tendency to herd other pets and kids. They often direct their aggression at cats, especially those who love playing with dogs and like to be chased. Like leash aggression, this kind of aggression stems from a lack of training and socialization.

This aggression happens when your dog associates darkness with a form of danger, they will get abnormally worked up at night. If you notice abnormal barking and biting at night, your dog might have this aggression. To make your Corgi quiet when they bark, you can leave some residual lights on when they sleep.

How To Train A aggressive Corgi

Monitor And Look For Causes

First and foremost, you must find the root cause of your dog’s aggressive behaviors. Corgis are instinctively aggressive. However, there are certain situations when external stimuli might trigger your corgi. It could be a person, an animal, colors, sounds, etc. Identifying the cause means you solve half of the problem.

Visiting the vet should be a part of your routine, not only when you try to find the cause of your pet’s aggression. It’s better to get your corgi checked up frequently by vets. They will examine your dog thoroughly and detect any underlying medical problems that would impact the dog’s behaviors.

The last option is to hire an expert in the field. Some corgis are just innately aggressive, so you need someone who is used to training difficult dogs to teach your dog how to behave.

To sum up, despite their lovely appearance, corgis could be aggressive when external factors trigger them, such as other dogs, humans, sound, or color. It is vital to train your corgi from a young age and help them to socialize with humans, dogs, and other animals. Early training will help corgis reduce the potential of being aggressive, showing less harm to humans and other pets. If there is any sign of aggressive behavior, please take your corgi to the vet immediately!