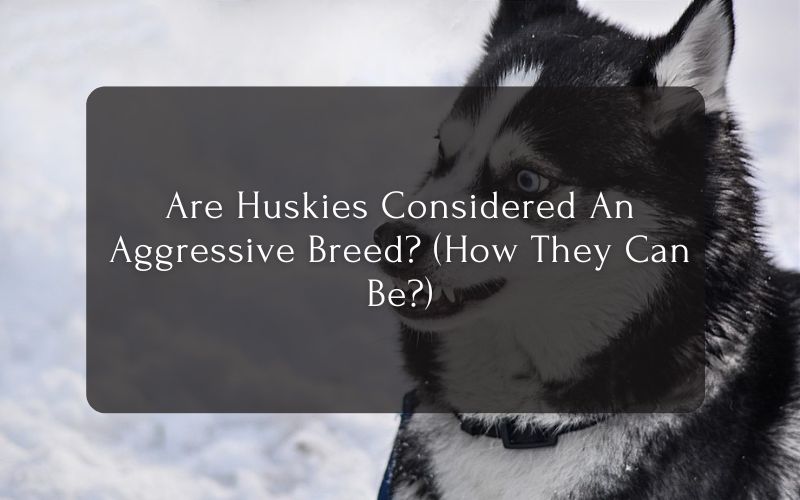 Husky, a traditional northern type, is a generic term for a dog used in the polar regions, primarily for sled dog work. Many people think Huskies may seem intimidating, but are they aggressive? In this essay, we will clarify the true nature of Huskies, and you will undoubtedly change your point of view about Huskies breeds after understanding them.

The History Of Huskies

Huskies are initially from the Chukchi Peninsula in eastern Siberia. They mix the Russian Laika and the Spitz, a very hairy breed. The Chukchi tribes used them as sled dogs to traverse the impenetrable Siberian forests and protect themselves. In the twentieth century, they were transported to Alaska for transportation in the harsh winter climate. They were also actively used in dog races, competing against each other.

Significantly, when the diphtheria epidemic struck the Alaskan town of Nome in 1925, a few Husky heroes helped save many people’s lives. To help stop the epidemic, the trained sled Husky dogs carried the vital healing serum through a heavy snowstorm. The serum had semi-frozen by the time it arrived. Still, it was used almost immediately and halted the pandemic.

Recognizing the signs of aggression in your Husky is critical for behavior modification. Let’s look in greater detail at dogs’ most common attack types.

Dominant aggression happens when dogs attempt to exert control over their surroundings. Early signs of a dominant attack are common when your dog is small. For example, it snarls or snaps when you reach for its food bowl or favorite toy. In addition, rigid posture, growling, a fixed and unblinking stare, an erect tail, and looming over other animals are all warning signs.

Mounting people and other animals, refusing to obey commands, and more aggressive displays such as growling, snapping, and biting are all common signs of dominant aggression. These dogs will use their influence to maintain control.

Predatory aggression is, unfortunately, a common problem for many working dogs. Huskies may see smaller animals, including small children, moving as a source of prey because they have a strong prey drive. As a result, we advise keeping your Husky in your direct line of sight when around children and other animals.

Look for a fixed, direct gaze, excessive lip licking, body tensing in preparation for a plunge, and a straight tail is typical expressions. If your dog rushes into a group of animals or humans, he responds to his instinctive prey drive. We must stop this immediately, so your dog understands you will not tolerate it.

Many dogs fiercely protect their property, home, yard, and family members. While some dogs are friendly toward visitors, others become aggressive when they perceive an invasion of their personal space. Territorial aggression resembles a dominant attack and can include snarling, snapping, and biting. Dogs can also detect anxiety or fear of strangers because they respond to nonverbal cues.

Huskies are athletic and energetic. In contrast to modern sprint sled dogs, they are distinguished by their hardiness and cold-weather tolerance. Similarly, they differ from Laika, which were not for the primary purpose of hunting game and prey animals.

Although they are not particularly good hunters or guard dogs, they can always defend themselves or their owners in danger. Generally, they make excellent family dogs and get along well with children if properly raised and trained. They rarely bark, but when they hear a police siren, some Siberian Huskies will howl like wolves.

Siberian Huskies have been tamed for an extended period and are one of the world’s favorite breeds. They are considered family pets for various reasons, so why don’t we consider some of these benefits?

Huskies Are Generally Sociable And Friendly

While they may not seem to be a friendly breed at first glance, Huskies have the potential to be so. Originally, huskies were bred and raised in large packs of up to 15 dogs. Because they live in groups, they are very playful and friendly. After all, this breed is familiar with spending most of its time with other dogs and their human tribe. Not only were they working, but they were also eating, sleeping, playing, and living in constant company.

Huskies Are Not Worth Guarding

Even according to the AKC, the Siberian Huskies is not a breed that is naturally suspicious of strangers or people with whom they are unfamiliar. Huskies’ high sociability makes them more likely to befriend strangers rather than be cautious or aggressive toward them. Huskies do not make good guard dogs due to their lack of suspicion. Aggression is one of the last things you should expect to see from a husky when a stranger enters your home.

Living so close to their pack of dogs and humans also conditioned them to expect constant company, which they adore and require. Huskies, in general, are eager to make friends with almost anyone to find a new playmate. Nothing makes your Husky happier than snuggling up on the couch and spending time with you and your family.

Huskies Are Classified As Medium To Large Dogs

Huskies are medium to large, with males typically being on the larger end of the scale. A big dog has a lot of strength and power, and the Siberian Husky also has a lot of agility. This case, combined with their insatiable desire to play, jump, and dash around, makes them a hazard to the small children in your home.

Huskies enjoy fighting, which they learned from their previous pack life. If proper training is not instilled in children from a young age, their excitement and jumping up may lead to worse situations.

Huskies Are So Energetic And Require Stimulation

Huskies were bred to pull heavy sled loads over long distances in harsh weather. Any husky should be adequately stimulated through daily physical and mental exercises such as training.

If we ignore it, it is natural that lousy behavior and destructiveness will result. This problem indicates that your Husky is frustrated. When dogs become frustrated, they must express themselves in some way, usually through destructive behavior, but this is not always the case. A frustrated husky could turn out to be dangerous and aggressive.

Huskies Are Stubborn And Self-Sufficient

Because huskies are notoriously difficult to train and have their mind, they often adopt a firm attitude toward doing what they want. This independence and stubbornness could be attributed to a less controlled dog who can never be completely trusted.

If you have a husky puppy, you must provide all necessary training early to avoid a poorly behaved, uncontrollable husky later on. With proper training, you can have an obedient, kind, and loving husky that never shows aggression or threatens others.

Huskies are pack dogs who need to know who is in charge. A transparent hierarchical system is necessary for your household, and your husky needs to understand he is at the bottom from when you bring him home.

Any jumping up, biting too hard, or boisterous behavior must be corrected immediately. Jumping up and biting will become a significant issue once your husky reaches 60 lbs.

A husky who believes he is in charge will undoubtedly cause many problems in your home.

If you cannot tell now, training is the most important thing you can do to ensure an all-around well-behaved and obedient husky.

Your husky puppy is more than ready to begin a rigorous training regimen. Basic obedience commands, potty, crate, bite, and leash training can be carried out when you bring them home.

Begin Socializing As soon As Possible

The recommended window of opportunity for socialization is as early as possible, with three weeks old being an excellent place to start.

Your puppy can start going to dog parks as early as 16 weeks old, which is highly recommended for maximum socialization. Besides, constantly meeting new puppies, dogs, and owners will increase their ability to interact with other animals and people without fear.

Support Your Husky To Exercise Regularly

Huskies can run up to 100 miles each day with ease. If they do not get enough exercise daily, this high-energy breed can become frustrated. Frustration can lead to aggressive and destructive behavior.

In conclusion, Huskies are loyal, intelligent, and affectionate dogs. Huskies, on the whole, are not aggressive. Please give it your full attention and care; you will not be disappointed. If someone tries to attack you, your Husky will try their best to defend you, but they will never attack without reason.