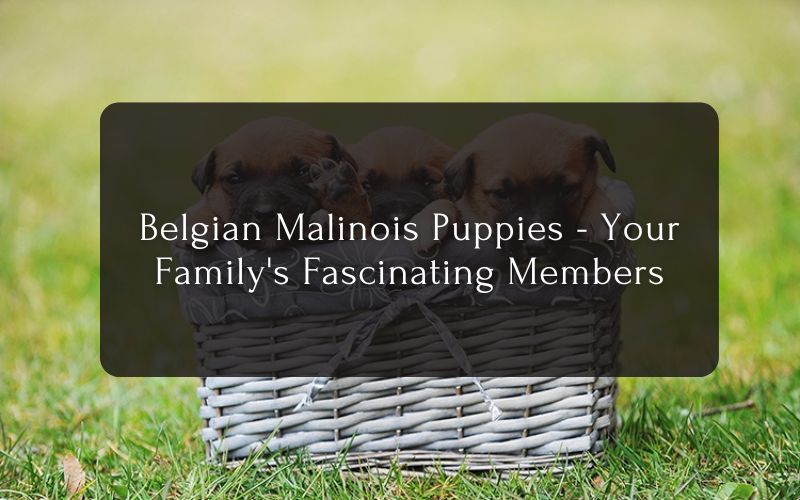 Intelligent, optimistic, and versatile-These are some adjectives you can use to describe Belgian Malinois puppies. They are genuinely faithful and lovely mates of humankind.

To take care of your puppy, read the following carefully if you plan to get a Malinois.

What Are The Features Of Belgian Malinois Puppies?

Suppose you are in doubt about raising Belgian Malinois or White German Shepherd puppies. We highly recommend that Malinois puppies are better, and here’s why.

The Belgian Malinois was originally bred as a farm and herding dog. Nevertheless, they appear both in the army and the police team to act as guard dogs and detectives.

They are inherently very intelligent, alert, and healthy, so many people like to raise Belgian Malinois as pets. Due to their high mobility and energy requirements, it is difficult to keep them in small spaces or enclosed apartments.

It may not be easy if you have never raised this breed before. However, if you raise your Malinois puppies successfully, they will be loyal friends to their owners for life.

The Belgian Malinois is inherently a Belgian shepherd dog. They are of medium size, with short, yellowish-brown hair inside with a black outer layer.

Previously, they were one of the four most popular cattle breeds. From 1959, they appeared in the United States as a purebred and unique breed.

At first glance, you can see how they look like the GSD-German Shepherd Dog, yet these two species’ temperaments and body structures are very different.

The Malinois dogs are little, their bones are lighter, and their body shape is square. Meanwhile, the German Shepherd Dog has a sloping and black back, looks bigger, and weighs more.

The Belgian Malinois has a well-proportioned and robust appearance. With an elegant look, strong muscles, and a flexible head and neck, they are extremely proud and tough.

They are strong, alert, intelligent, and energetic dogs. They stand on all fours. When you look from the side, the dog’s top, front and hind legs form a nearly square shape.

Males are typically more impressive and larger than females, 24 to 26 inches tall at the shoulders and weighing 60 to 80 pounds. Females are only 22 to 24 inches tall and weigh between 40 and 60 pounds.

Many people assume a Malinois dog is always more responsive to situations than a GSD. They are also pretty sensitive animals and can be difficult to train if applying methods of harsh teaching. Many Belgian Malinois puppies are very friendly and open-minded. Meanwhile, other individuals are reserved and do not like being close to humans.

Due to their high energy level, hyperactivity, and high sensitivity, the Malinois is recommended for people with experience in dog breeding and training. If you raise them for the first time, it won’t be an easy game at all.

The Malinois is particularly active and enjoys being involved in family activities. Therefore, if you are often away from home or busy with work, raising them will not be suitable! They especially do not like being home alone too much.

If you decide to raise this breed, you should introduce your dog to other family members and other animals that will make them get acquainted. Better yet, let them participate in dog training classes. The dog will be more flexible and obedient.

Originally appearing in Malines, Belgium, they are known to be stamina and hard working. Besides, the Malinois is also very smart, flexible, and dynamic.

They later train them to work for police stations, rescue, rescue, and search for the above qualities. This breed is very special because of its ability to learn quickly. A Malinois dog is always active and willing to do any required thing the owner asks.

The most prominent are throwing a ball, herd, searching, rescuing, scouting, and participating in active sports. They are ready to play with you when you have time to spend with them.

Yet a Malinois owner needs to know that this breed was developed for protection. Dogs that are difficult to socialize with are often very combative out of shyness or fear.

It is worth mentioning that this dog’s temperament is affected by several factors, including genetics, socialization, and owner training.

Often as a child, puppies are curious and friendly. They are willing to approach and play with people and love to be held by them. So, let them meet and interact with family members. This way, the dog will bond more strongly with your family.

Socialization can ensure that your Malinois is fully developed. Do not hesitate to enroll them in a puppy kindergarten class. This will be a great start to helping them hone their social skills.

Related post: Belgian Malinois Dogs – Should You Adopt Them as Family Pet?

Are You Curious About Belgian Malinois’ Origin?

The first generation Malinois may have the original from a breeding pair of Adrien Janssens. He purchased a pale yellow poodle called Vos I in 1885, and Janssens bred Vos I for herding the sheep and crossed it with a short bray-dog called Lise.

After mating between Vos I and Lise, a new breed was born. It possesses a ruffled brown coat and short fur. Today, Lise de Laeken and Vos I are recognized as the current Belgian Shepherd dog’s ancestors.

The Belgian Shepherd Dog is also used as a guard dog, a sled dog, and even a police dog. During World War I, many Belgian shepherd dogs appeared in the military due to several jobs, including courier dogs, Humanitarian Aid dogs, and emergency dogs.

Before World War II, in Europe, international police dog trials broke out. Belgian Malinois has won some awards in these studies.

The Belgian Malinois has received lots of recognition over the past decade for its military work as it destroyed drug lines. Also, they operate rescue, search, and support police forces worldwide. For this reason, the United States has imported many Malinois over the past few years.

This Belgian breed today serves a wide variety of industries and activities. The police and armies of other countries also seek them out as loyal partners.

In Fayetteville, North Carolina, monuments have been built for Malinois dogs because of their great military contributions throughout history.

What Should You Care About Their Wellness?

Belgian Malinois Puppies are very healthy. However, like any dog, several diseases can occur.

Not all Belgian Malinois puppies will have the same conditions listed below. But to best care for your dog, understanding these diseases is essential.

It is inherited when the femur does not fit properly in the hip socket, resulting in pain and limping in one or both hind legs.

Dog symptoms are often noticeable when your dog gets older; arthritis progresses and puts the dog in trouble.

Besides genetic reasons, eating too many calories is another reason Malinois puppies have Hip Dysplasia.

In the long run, the disease will cause the dog to become blind as the light image receptors in the eyes are gone.

Another common genetic condition: Elbow dysplasia. The primary cause that veterinarians suggest is the uneven growth rate between the three bones, which builds up the dog’s elbow, causing the elbow to loosen and lead to pain.

In this case, the owner needs to bring the dog for surgery or treatment to relieve the pain.

How To Care For A Malinois Dog?

You should give your Belgian Malinois to its high-quality line of dog food. Home-made or commercially made products are fine, yet you need to be monitored and approved by your veterinarian.

The age-appropriate diet of this Belgian dog is very important. Some dogs are susceptible to being overweight due to the excess calories relative to their weight diet. Hence, adjusting the diet so they are always in good shape, and balance should be considered.

In terms of exercise, give your dog about twenty minutes of playing a day. They usually enjoy the vigorous activity, not slow walking. Hence, it is better to give them a jog, and if you are with them, they will be more than cheerful to be with you.

Also, the Malinois is sensitive and is great for intense training. Their owners should always be firm and steadfast when caring for and training them. Anger can only backfire.

Belgian Malinois Puppies are lovable and active dogs. Accordingly, this dog is a great choice if you want a dog active in all family activities and in good health.

If you decide to raise them, you should read carefully about how to care for them so that your dog will stay healthy.

Thank you for reading!