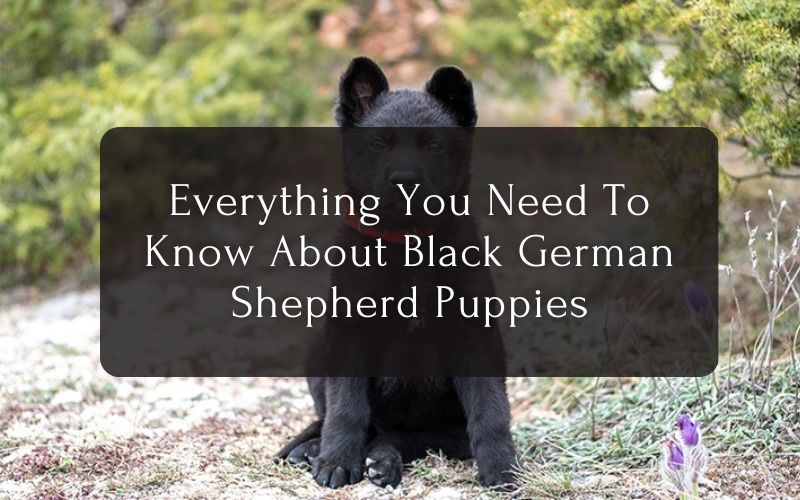 Only 6.8% of the world’s 2nd most famous dog breed is Black German Shepherd Puppies, which is astoundingly rare! If you want to know more about these exceptional pets, you have come to the right place. This article shows a condensed viewpoint on their origins, features, personalities, and habits with an in-depth walkthrough of how to raise these peculiar puppies. Please keep on reading!

Where did Black German Shepherd Puppies come from?

As clearly as it sounds, German Shepherds appeared in Germany in the late 19th century. They were used as professional herd dogs, watching over livestock at that time.

Generally, it is unusual for a German Shepherd Puppy to stay black after eight months of age (if they are born black). However, only a true black Shepherd is born black and stays black for their entire life. That is how you tell them apart.

Their physiques are elegant, long, lean, and quite muscular, along with a long tail and short legs. Their almond-shaped eyes are deep brown. You will also notice that their upright ears are always on high alert, making them perfectly fit for an intelligent herd dog.

The Black German Shepherd babies can weigh around 370-600 grams at birth, considering their large dog breed. When they are a week old, the shepherd puppies can weigh up to 725-950 grams, double in size. Eventually, they will reach a height of 56-66 cm in their 18th month.

A straighter back and larger size are typical traits of a Black German Shepherd compared to the standard German Shepherd. Their coat can be either long or medium, but some people will be amazed by their flowing, feathering black long coats.

To identify a Black German Shepherd, it has to have full black fur. Besides a pure black one, other variants can be black coats with tan, cream, silver, red, sable, and spotted. However, the solid color is the rarest.

Are They Home Friendly?

Baby German Shepherds are considered playful and friendly and get along well with people, even children and other pets living in one house. On the other hand, they are quite intimidated by strangers due to their inherent instinct.

If a baby German Shepherd is poorly trained, it becomes more high-strung and anxious later on, leading to over-guarding and aggressive behaviors. Therefore, they will be excellent pets once you spend enough time educating them.

What are their lifestyles?

Black German Shepherd puppies are very active. You have to spend at least an hour per day on outdoor activities such as walking, running, playing, and fetching them. These energetic moves will stimulate their brains and prevent them from being high-strung.

They can also spend quality time in-house if you balance it with their time outside the house. A perfect indoor environment for the baby Black German Shepherd is some spacious places with toys to chase around, rolling on and off all day.

If you have a backyard (with fences), which is even better, as the puppies can play fetch and catch without worrying about strangers interrupting.

The dog sheds most heavily while shedding two times a year, besides other small shedding sessions. To avoid shedding and keep the coat shiny, brush at least five weekly times.

What activities do they love?

Despite years of training to become a house pet, the Black German Shepherd still needs some time to be out in nature and nurture its energetic instinct. Here is some puppy schedule to do with the baby German Shepherd:

There are some borders NOT to cross when living with your black German Shepherd. It is for the sake of your safety and theirs. Do not pull their ears or fur; they will react aggressively by barking, biting, or snapping. Remember to respect your puppies at all times.

How To Feed Them?

Now you should know how to feed your puppies correctly. To adjust to their active and social lives, a black German Shepherd needs a 2000-calorie BMI per day. The older they get, the lesser the calorie intake is required.

A suitable diet for a black German Shepherd consists of high protein and fat with moderate carbohydrate levels. The eating portion varies according to the types of food and brands, but you normally need to prepare 3 – 5 cups of dog food.

It is better to feed them several meals during the day to avoid bloating. You can also give them some snacks in between as a reward for being well-behaved. Some ideas are apples, carrots, bananas, tomatoes, yogurt, cooked chicken, or even peanut butter.

In case you are wondering: Can dogs eat fish? Or can dogs eat chocolate? We have a small reminder for you. Avoid these foods in your pet’s diet: Grapes or raisins, chocolate, onions, garlic, caffeine, gums, salty food, and chicken bones. Also, keep alcohol or medicines out of their reach to prevent undesirable consequences.

Get yourself a Black German Shepherd puppy!

All in all, Black German Shepherd Puppies are considered friendly pets to play with while being appropriate to turn into a housekeeper in dangerous times. They are great alternatives if you are not into Black Golden Retriever. They are intelligent, loyal, and trustworthy if you educate them correctly. If you are eager to get one right now, go ahead because they are worth it!