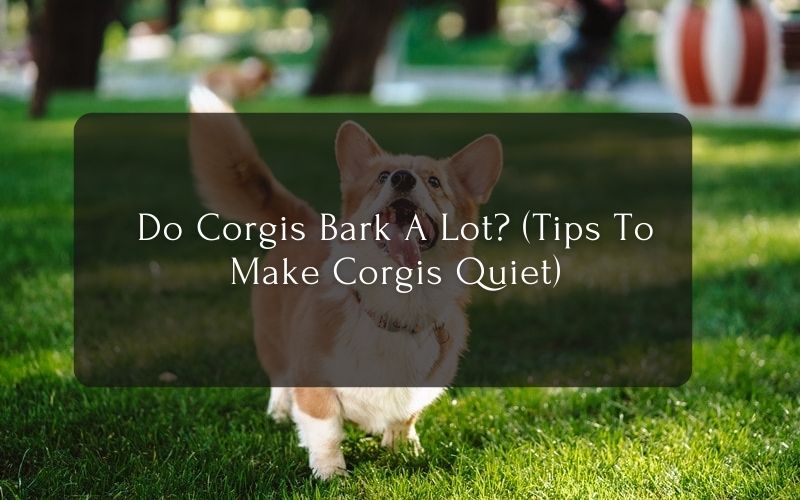 Among all dog-related actions, barking is an instinctual one that sometimes may get excessive. A corgi is not an exception to this vocal behavior, so the answer is yes, corgis bark a lot. The first step you may want is to get a deeper insight into the reasons behind it before coming up with any tips on stopping them from doing that.

Do Corgis Bark Too Much?

Divided into two different sub-breeds, Corgis are well-known as a dog breed with an annoyingly barking behavior sometimes. Not every corgi in every house will act precisely the same, but they still bear some resemblances regarding why they bark so much. It is high time we discovered the five main motives behind the behavior above corgis.

Why Do Corgis Bark Excessively?

Firstly, “Hey, I need attention!” might be the catchphrase of corgis’. In other words, they urge your concern after you have gone elsewhere for so long before returning home to befriend them. With little knowledge about this behavior, paying attention only after excessive barking will alert them that barking can always make you look at them. Corgis’ independence is not entirely a negative trait, but it might be similar to stubbornness.

Secondly, unexpected guests who assume Corgis are the cause of allergies and push it away might trigger their defense mechanism. With their adorable appearance, do you think they can not be amazing guards? I am sorry to correct your thinking if I hear it right. Keeping stray creatures away from the farm territories is their initial chief job. More detailed, their alertness plays an important role in the mentioned mission. Despite being house pets nowadays, you can do nearly nothing to get rid of this original instinct. Moreover, this trait also works concerning the appearance of strangers within the house they are at.

Thirdly, it might surprise you that corgis bark is owing to their desire for reinforcement. If there’s a device that helps you look into a corgi’s mind when they bark toward a moving vehicle or person, you can see its pride in being so “big” and “powerful.” Corgis usually can’t distinguish whether other creatures are intimidated by their barking, so they may carry out that behavior whenever a moving object comes into their sight. There’s nothing the owners can do about it.

Fourthly, an astonishing fact is that corgis can bark too much due to solitude. They are social butterflies in light of working and living among numerous farm cattle nearly daily. Accordingly, you can remember that corgis sometimes bark out of protest when left alone for a relatively long time without any companion. With this dog breed, you can even joke that they are the extreme extroverts of the dog world. Don’t you think this feature is so similar to a human?

Finally, unbeknownst to most, boredom might be a reasonable cause for corgis’ sudden outburst of sounds. As mentioned above, since corgis are initially working dogs meant to supervise cattle, they tend to keep themselves busy with mental and physical activeness. Even when they are considered buddies in our houses like now, if we fail to fulfill their demands, they will have to entertain themselves with other activities. That’s when barking happens, especially whenever they find something intriguing to do.

Tips On How To Make Corgis Quiet

Having gone through the three most common explanations for corgis and their uncontrolled barking behavior, you may want to refer to some tips on how to refrain from that. Shall we start now?

To begin with, if you want them to stay quiet when strangers approach them, try having friends or family members come over more. An important reminder is that you should try this method for humans first, and then, when the situation looks up, ask your guests to carry their pets along. Believe it or not, this will teach corgis how to blur strict boundaries to socialize better. This can be even clearer when your Corgis are grown up and mature, and they tend to be calmer and more even with other dogs.

Next, another solution you might want to consider is bringing your corgis to the parks. There, they meet more friends and other animals. Especially, Corgis have good relationships with cats, and they can play happily together. The owners must be calm since your mood may also decide whether your corgi acts up. Moreover, remember to give it some small treats so it can have a sense of achievement and maintain a bark-free attitude next time. One more thing, you should no longer feel tense when other dogs come near your pets!

Last but not least, the ultimate key to fixing your corgis’ behavior may be sending them off to the doggy day centers. Being in a community is essential for this dog; being supervised by other dogs will help with their undesired reactions. To register for a course, you need to book in advance. However, this routine needs to be weekly rather than an “on-and-off”.

Should I Ignore My Corgis When They Bark Excessively?

At that moment, sure, but it’s essential to reward them with a little treat after they’re back to being quiet. Carrying on leaving your pets to bark like that until they stop due to tiredness will only backfire. It is vital to remember that your every response to their unwanted actions from time to time bears the responsibility of training them well.

What Heritage Does Corgis’ Barking Behavior Originate From?

As you may know, Corgis were initially trained to control masses of cattle within farms, and obviously, the loud and excessive barking did help them successfully handle that task. Even when most Corgis accompany people as house pets, it is tough for them to get rid of this habit. In other words, Corgis’ herding heritage makes their barking behavior instinctual.

As you may know, Corgis were initially trained to control masses of cattle within farms, and obviously, the loud and excessive barking did help them successfully handle that task. Even when most Corgis accompany people as house pets, it is tough for them to get rid of this habit. In other words, Corgis’ herding heritage makes their barking behavior instinctual.

Should You Use A bark Collar?

You had better seek training methods that work slowly but steadily, not with clear impacts on the spot but may cause hidden threats in the future. Barking is a means of communication and entertainment among corgis; therefore, using any method of forceful inhibition will only backfire and make Corgi more aggressive over time.

Hundreds of dog breeds exist in our society, and it’s irrefutable that while some are relatively quiet, others might be regarded as noisy, including corgis. Stopping a dog from barking is like stopping a human from talking. However, if that behavior is uncontrolled and slowly becomes annoying, the owner and corgi will suffer.

After looking at all the possible causes of corgis’ excessive barking, we expect that you can build a loving relationship yet with strict boundaries with your pet in the future.