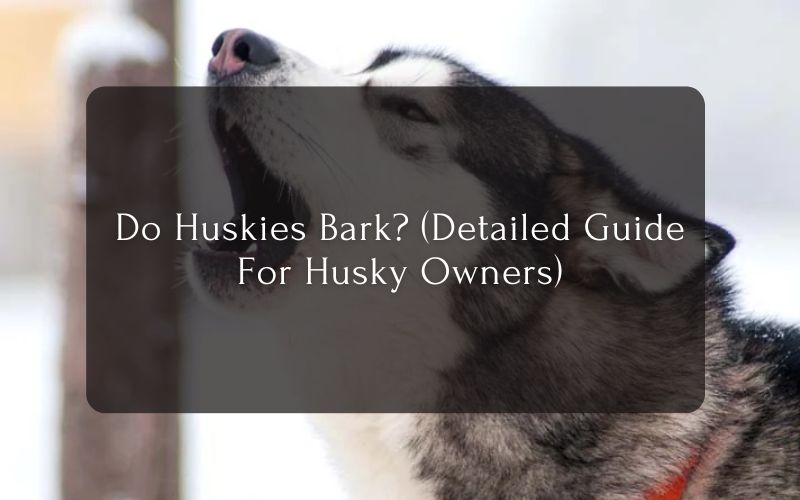 Are you about to get a lovely husky, or are you taming one? So you may have many questions about his way of communication – barking. Nothing is worse than a dog that barks loudly at midnight or attacks your sleeping at 6 AM. Surprisingly, Huskies do not bark very much. Even though huskies have the physical ability to bark, they hardly ever do. Instead, huskies howl far more often than they bark. Therefore, in comparison with barking, huskies are more likely to howl, whine or even speak than bark.

Why Do Huskies Not Bark?

It is one of the characteristics that distinguishes Siberian huskies from other breeds. Although these dogs can bark, you will rarely hear them. A barking problem in a dog of this breed is unusual. Sometimes if huskies want you to cuddle or play with them, they bark at you. Aside from that, they don’t bark very often.

Dogs of various breeds bark for a variety of reasons. Some dogs bark to communicate territorial issues; others bark to express affection or to greet their human companions. It’s the same as talking. Besides, the majority of dogs bark for territorial reasons. Huskies, on the opposite side, are a different story.

In response to your question about how frequently Huskies bark, it has already been stated that these dogs are not particularly territorial. Although these dogs can bark, you will rarely hear them. Huskies aren’t particularly territorial, so they have no reason to bark to alert you to strangers or potential intruders. That’s why huskies make terrible guard dogs. They lack the instinct to bark when a stranger approaches your house.

Huskies rarely bark because they love to communicate with you through other means, such as howling, whining, or speaking. If you don’t feed your husky on time, you’ll likely hear whining and howling but no barking.

Why Do Huskies Prefer Howling To Barking?

Although descended from wolves hundreds or thousands of years ago, Siberian Huskies have got familiar with cold weather and lived in predictable ways, primarily outside in the same environments and packs. Wolves howl to communicate with one another. By doing that, it is easier for the other wolves to locate the source of the sound than a bark.

For huskies, howling is more efficient because it is louder, goes far, and quickly draws the attention of others. It’s also how huskies express their emotions:

While almost other dog breeds bark for all these reasons, huskies howl for those.

Husky’s image as a very energetic dog breed is that Husky will occasionally howl in response to something random that happens around them. This may seem strange, but they most likely see it as another pack member who could be lost. It’s a natural automatic response that your Husky is unable to suppress. We don’t know if a particular sound has a similar frequency to a howl. But it is to your Husky’s finely tuned ears.

When a baby cries is another classic example, they are family members to us, but to a Husky, they are pack members, including babies. Huskies have an incredible nurturing instinct; if a baby cries, it is normal for the Husky to howl to comfort the baby. How sweet!

Why Do Some Huskies Bark?

Barking or howling is used to warn or attract attention because they want something. So, while having a barking Husky is still possible, it is still hard to see such a bark-alike Husky occasionally.

They howl in response to sirens, passing birds, and raucous laughter. However, they would bark when they tried to entertain other dogs or humans. Furthermore, Husky can change their vocal behavior due to the living environment. They will bark to respond to the featured sounds instead of howling. The way of communication that Husky use in that situation is for adapting, which help them to make a demand, talk to other dogs or even express feelings to the owners more efficiently.

In short, all Huskies have unique characteristics and will communicate in various ways, depending on certain circumstances.

Besides, every Husky has dramatic characteristics and personality.

Some huskies bark on rare occasions when they are excited, while some would only sometimes talk and rarely bark. A Husky regularly howls, but he whines and talks as his main method of communicating with the owner.

One day, you realize uncanny barking sounds from your Husky. But do not be too worried. Of course, barking is not primarily seen in a Husky, but reasons for the barking could exist. Your Huskies may bark in response to stress, anxiety, or loneliness.

For example, if you find your Husky bark in the corner of your house for hours, it might signal that something is wrong. Maybe a strange animal is trying to approach you, and your Husky feels unsafe.

Take note of the situation if you notice your husky barking. Then try searching: What led up to this point, and what do you think barking means?

It can be difficult to detect problems, so if your husky begins to bark, take note of the situation, body language, routine, and diet. Please make a note of everything (such as how often you bathe them), so they will be helpful someday.

In most cases, your Husky will start barking if they need to go outside to relieve themselves or see another Husky in front of your door. In either case, a sudden desperate need for something may result in them barking rather than howling.

So, always keep a record of the situations and events that led up to your Husky barking. That would be note-worthy things to help you in training your Husky.

So you now have more helpful information about your adorable Husky, who does not typically bark. Regardless of the above, barking is not a natural characteristic in general. But remember that anything is possible, and every Huskie is unique! So don’t forget to pay attention to each situation and when your Husky barks to determine if something is seriously wrong.