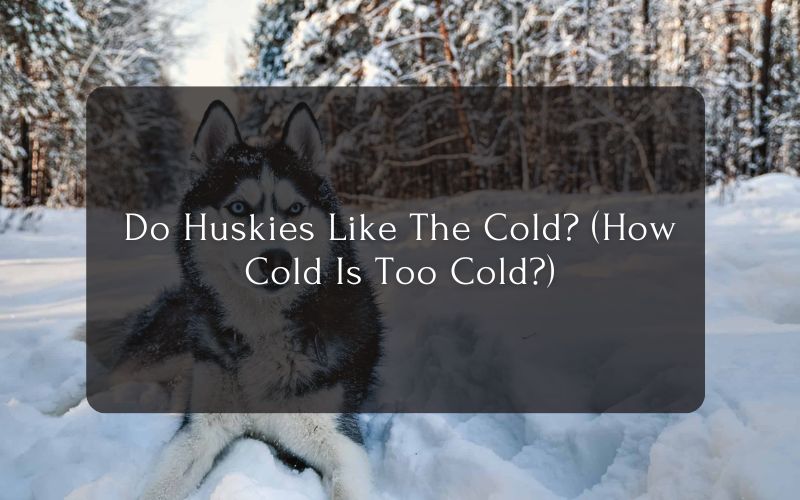 Huskies initially appeared in the northeastern section of Siberia, where they quickly earned a reputation for being exceptional sled dogs and companions in harsh, snowy weather. But have you ever wondered what makes it possible for this kind to endure in such extreme, subzero conditions? Do Huskies like the cold? The answer is obviously yes, which may not come as a big surprise. They enjoy being in low-temperature environments, provided it doesn’t get too cold (below 75 degrees Fahrenheit).

Why Can Huskies Withstand Freezing Weather?

Huskies Are Dog Breeds That Come From Cold Climates

The Chukchi domesticated the Siberian Husky, a native Siberian dog, to pull sleds for extended periods in extreme environments. Over 3000 years later, Huskies are a common breed of a household pet. They enjoy being outside a lot, no matter the weather.

They Have A Double Coat Of Fur To Keep Warm

The Husky has two layers of fur—an exterior layer of guard hairs that shields it from the environment and an interior layer of a softer coat that insulates its body.

Additionally, Huskies have a substantial layer of fat under their skin that assists in insulating them from the cold.

Huskies Have A Higher Metabolism, Which Generates More Heat For Their Bodies

Huskies can produce more heat to keep themselves warm since they have a more significant metabolism than other dog breeds.

How Can We Recognize If Our Huskies Are Cold?

Shivering is possibly the easiest way for a husky to indicate that it is chilly. This spontaneous response is created by the body when it becomes too cold. It occurs in dogs as well as in humans.

Because Huskies have dramatic behavior so it’s simple to determine that there is a problem with them. If they are moving around and not curled up, they might move much more slowly than usual or express apparent symptoms of distress.

A husky will snuggle up with its tail wrapped over its face when it feels cold. By holding its breath, the tail warms its cheeks and nostrils.

Ice on their coats

If the snow covering your husky’s coat is not melting, the animal is not shedding body heat.

Trying To Get Attention

Your Huskies may bark, whine or howl to catch your attention even though they may be pretty calm most of the time, which is another indication that something isn’t quite right. They won’t be able to explain anything; all Huskies can do is use their vocalization to express that something is wrong.

Huskies’ life in the cold

Huskies are unique in their structure and constitution, and they enjoy the snow because it provides them with the most pleasant living conditions with suitable temperature levels.

By a few straightforward measures, you can ensure that your Husky appreciates the snow as much as they would any other season.

There are several reasons why your husky might like ice. To start with, it can be a cool treat on a hot day. Dogs need to discover different ways to cool off because they don’t sweat as much as people do.

They can prevent overheating and swiftly drop their body temperature by consuming ice or drinking water with ice.

Ice can also ease any pain brought on by teething if your Husky tends to chew things. But be careful not to give them too much ice, as that can upset their stomachs. They can withstand cold temperatures as low as -65 deg F (-54 deg C)

Siberia Huskies may endure as low as -65 deg F. Since they are accustomed to frigid climates, they can survive this temperature. They came from Siberia, a region entirely covered in snow.

If you take your Husky outside in the cold, be sure to provide them a warm area to relax afterward and watch for indications of distress like trembling or whimpering.

Things To Do Keep Huskies Warm

Extreme weather activates an organism’s body’s thermogenesis system. The process of generating heat is referred to as “thermogenesis”. Huskies shiver to generate heat when they become too chilly. By contracting the muscles, shivering helps to create heat.

Although shivering is beneficial, you should be aware of your dog’s health and ensure they have all the necessary supplies. Bring it into the house and keep it close to the fire so that the heat from the fire would warm its body. And maybe hugging, and cuddling your husky is not the bad idea.

Get Them An Outdoor Heated Bed

Can Huskies endure the cold outside? The conventional response is that they need a decent shelter to remain outside. After spending too much time in the snow, the Siberian Husky will take advantage of sleeping on a heated bed.

Make Some Hot Soup For Your Husky

It is vital to consider whether this temperature is suitable for your husky if there is a significant amount of ice on its coat. You can notice that your Husky is not performing an effective metabolism. Its body is not dissipating the heat.

Making meals for your Husky is necessary to provide them energy to keep their bodies warm and active.

Buy An Insulated House For Them.

The surrounding environment might get extremely cold due to the air and snow, and the temperature may even drop to -60 deg F. This is quite unpleasant for the Huskies in snow. Consequently, your husky may be best protected in an insulated home.

What Temperature Can Huskies Tolerate?

Since ancient times, we have used Huskies for pulling logs and timber in the deep snow and freezing Polar Regions. A husky’s lowest temperature can withstand between 0 and -10 degrees C.

Can Siberia Huskies Sleep In The Snow?

In the Northern regions, we commonly see Huskies sleeping in the snow. They adjust to sleeping in arid and chilly environments. However, you must give your Siberian Husky the necessary shelter, with good insulation and glass covering; if the temperature falls below the threshold, it can resist.

Additionally, if you install a tiny heating system, the dog house’s temperature will automatically be within ideal bounds.

What Temperatures Seem Too Cold For A Husky?

Huskies can endure as low as -65 deg F. Your Husky could have difficulties if it drops any lower.

They have an active metabolism, producing heat by shivering thermogenesis, which allows them to move around even in freezing conditions.

Have you ever thought about Husky snow boots? Actually, in the snow, they don’t need footwear. The Huskies are endowed with unique paws by nature. These paws were designed to run and stroll on the snow in frigid conditions.

So, do Huskies like the cold? They enjoy the cold as much as their forefathers did in icy Siberia. Huskies are a dog breed that enjoys living in cold climates. They can endure the cold outside, but you must provide the right conditions for them to avoid freezing to death.

A Siberian Husky living outside in the snow is typical, but it needs protection to avoid getting cold and developing health problems. You should take your Husky to the vet if it becomes chilly.