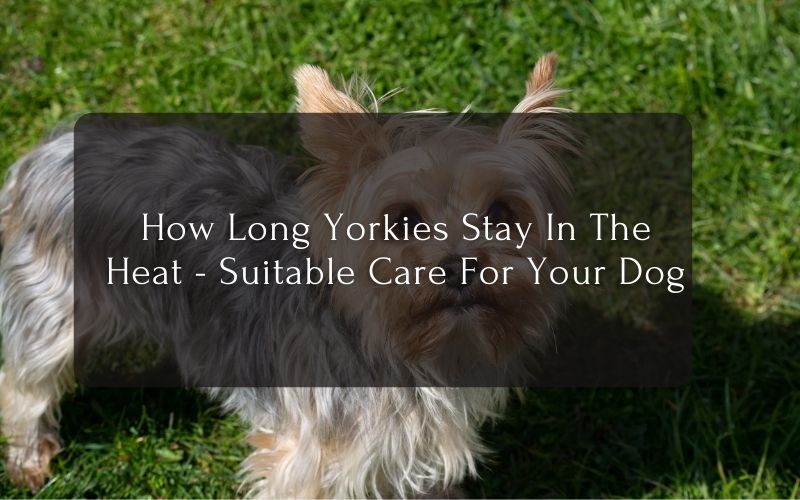 Dogs must be carefully monitored and cared for in heat to get the best health. Therefore, many Yorkies owners often wonder how long Yorkies stay in the heat. For some people, a female Yorkie in heat can be wonderful. But it can also be a problem if you don’t want to breed your dog. And usually, the Yorkies dog’s mating process lasts about two to four weeks.

What Is The Yorkie Heat Cycle?

Like a woman’s menstrual cycle, a dog’s heat cycle describes its reproductive process. It has four stages and goes through each once every five to six months.

Bleeding, vulva enlargement and a behavior change are all signs of the cycle’s first two stages. The typical duration of these two phases is 14 to 21 days. The latter two phases are a period of relaxation and recuperation, or in the case of pregnancy, the development, delivery, and subsequent recovery of the puppy. Dogs’ cycles might differ from one to the next and can also alter as they age.

More detailed information on the four stages of the Yorkie’s heat cycle can be found below.

This initial stage considered a preparation period, lasts seven to ten days. Your dog’s vulva will swell up and occasionally darken at this stage. Blood will start oozing from her vagina.

This discharge usually starts thicker and darker before becoming thinner and more watery. Your dog will likely lick genitalia to remove this fluid, as you will probably observe. At this point, Yorkies won’t have any desire to breed.

In dogs, bleeding occurs early in the cycle. Compared to the human menstrual cycle, there is a big difference because it happens at the end, not at the beginning.

The female is most fertile during the estrus stage and also when she becomes receptive to mating. It can persist longer but usually lasts 3 to 4 days. When the discharge stops, what’s left is more pinkish than crimson. The vulva softens and expands further.

At this stage, male dogs will chase her. If she is not neutered and you do not want her to become pregnant, keep her away from them.

The third stage lasts about 60 to 90 days. It lasts until delivery in a successful pregnancy.

The last period lasts between 30 and 90 days. Essentially, it is the interval between the end of the diestrus stage and the beginning of the subsequent heat cycle. These cycles are really sensitive, so you should keep an eye on her some reactions, such as hypoallergenic, licking, or peeing too much.

How Long Is A Yorkie In Heat?

A female Yorkie’s heat cycle can be expected to last between two and four weeks; however, they may differ depending on age. It can change as the Yorke ages and varies from cycle to cycle. A female Yorkie will experience a heat cycle every five to six months when she fully matures. She will likely experience more cycles annually than a larger breed. The Yorkie might only have one period a year as she ages. However, your dog may not be entering her heat cycle for various reasons, including uterine problems or infections.

If your Yorkie’s heat cycle seems to last too long or occurs too frequently, your dog may have a vaginitis problem; you may want to make an appointment with your vet to check this issue.

When Are Yorkies In Heat For The First Time?

Sometimes it can occur as early as five months old or as late as 14 months. You should take your female Yorkie to the veterinarian for a checkup if she hasn’t been spayed and hasn’t gone into heat by the time she is 15 months old.

Symptoms That Your Yorkie Is In Heat

If you want to realize whether your dog is in heat or not, then rely on the following symptoms:

One of the apparent signs that your dog is in heat is a vulva that is swollen. It can occasionally darken. Of course, you can only see these modifications if you are familiar with how the vulva typically appears, so take a look immediately.

The Small Amount Of Discharge

You might also notice a small quantity of discharge coming from your Yorkie’s vagina while she’s in heat. The release will be whitish-pink to dark crimson in color. Throughout the cycle, it’s typical for the color to vary.

Many Yorkies may experience uterine contractions during the heat cycle, and hormones may fluctuate. As a result, when Yorkies are in heat, they often eat less or more than usual.

If you find that your Yorkie is acting like a mother with toys or other items, collect them in her bed. That’s the nesting behavior that usually occurs when Yorkies are in heat.

Similar to humans, female dogs may exhibit unusual behavior due to changes in their hormone levels. Your dog may suddenly begin to cling to your side. She might also act more abrasive than usual.

It is also a symptom when Yorkies are in heat. When your dog is in heat, you can observe her continuously licking her genital region. To remove the blood that leaks from her vagina, she does this.

The above are some symptoms of Yorkies in heat, but you should remember that it is not valid for all.

When Can A Yorkie Become Pregnant During The Heat Cycle?

Yorkshire Terriers can become pregnant at any point during their heat cycle. However, typically, the most fertile days for breeding occur between the tenth and fourteenth day of their cycle.

Taking Care Of Yorkies In Heat

It’s essential to know that your Yorkie can act differently once her heat cycle starts. Give her space and a quiet spot away from kids if she becomes aggressive until she feels more like herself.

Your Yorkie should be prevented from urinating on any furniture you don’t want to be stained while she is menstruating. You might try using washable diapers or disposable diapers to contain the mess. Given that some dogs clean themselves, it’s likely that you won’t even notice any discharge.

Additionally, you could see that the discharge had set into her hair. A wash or soft dog wipes will effectively clean the area in this situation.

Before a female is open to receiving a mate, males will be drawn to her while she is in heat. They can detect her pheromones in her urine and on her from a distance of several miles.

During this initial stage, she may exhibit defensive hostility to warn guys to keep away. It’s probably better to keep her on a short leash away from males at this period. If you don’t want her to get pregnant, this is especially critical during estrus (the second stage of fertility).

Though a female Yorkie can conceive outside the estrus stage, keep that in mind. Once the bleeding starts, it’s generally a good idea to keep her away from males for three to four weeks to ensure she doesn’t get pregnant. If you want them in a new environment, you can take them to a pool and train Yorkies to swim, reducing the hot inside them.

Spay Your Yorkies? Should Or Not?

It would be best if you spayed your Yorkie. Thanks to it, she will be protected from other dogs, and you’ll feel safer too.

The Humane Society advises having your dog neutered and spayed for the following reasons:

According to the Yorkie Information Center: “It is very strongly recommended to have your dog spayed. In today’s day and age, veterinarians are spaying dogs even before their first heat cycle, and it is safe to do so if she is in good health.” Besides, a Yorkie can be spayed while in heat. However, she is more likely to experience bleeding and other post-operative issues. Most vets recommend waiting until before or after your dog has shared her first heat cycle to lower the risk of difficulties. Moreover, if you want to know more about your dogs, you should first learn what to do to keep them healthy.

It would be useful if you were prepared to spay your Yorkie unless you breed them. She will be more secure with other dogs, comfortable, and protected against unintended pregnancy.

Now that you know what to do when your Yorkie is in heat. It depends on you to decide whether to have her spayed to improve her quality of life and give her the best opportunity for a longer life.

Furthermore, some researchers from the University of Georgia examined a sample of over 40,000 canines and discovered that spayed female dogs had an average lifespan of 25% longer than unspayed female dogs.

The same study discovered that sterilization raised the risk of cancer or autoimmune disease but decreased the risk of dying from trauma and infectious diseases. Other vets claim that females who are not spayed are more likely to develop mammary tumors and pyometra, a painful and dangerous uterus infection.

Overall, it appears that spaying promotes the health and longevity of dogs. However, please talk with your veterinarian for recommendations unique to your dog.

The article How long Yorkies stay in the heat provides the necessary information for Yorkie dog lovers about the issues related to the dog’s heat process. Most Yorkies experience heat twice a year, lasting from two weeks to a month. When your Yorkie is in this phase, it tends to be very vulnerable and exhibit many unusual expressions, so pay attention and care for them promptly.