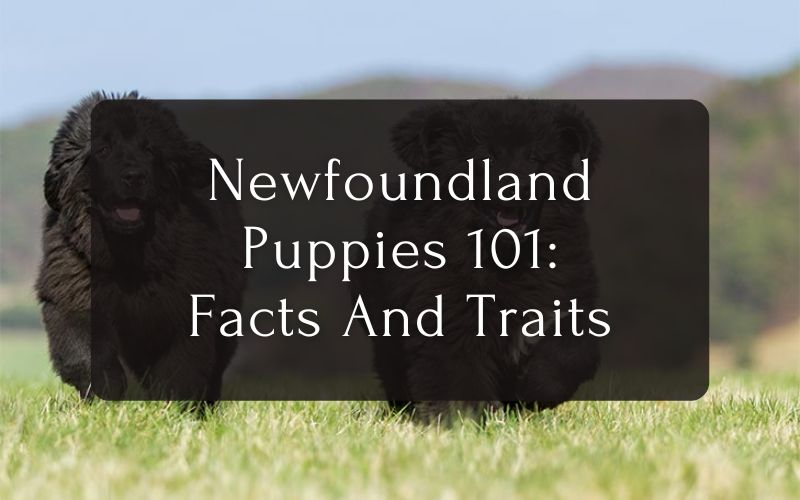 Are you a dog person? If so, you must hear and know a little bit about Newfoundland puppies. In case you have no idea about this breed, welcome to our post. We will introduce everything about this breed to you now. Scroll down and enjoy it!

What Is The Origin Of Newfoundland Puppies?

The Newfoundland breed (shortly known as Newf) is named after the island province of Canada – Newfoundland.

Biologically, this breed is the descendant of an indigenous dog landrace (also known as the Lesser Newfoundland because of its medium-sized figures).

Newfs are born swimmers with incredible strength. In the past, they were working dogs who hauled carts and other equipment and saved drowned people. Until now, Newfs are still considered dramatic water rescues.

The Newfoundland puppies nowadays are the cross-breeding of landraces and mastiffs which have large-size bodies.

It owns webbed paws with a double-waterproof coat. The hair on the face and the muzzle are short while in the body, the tail and the back of four legs are feathered down. That’s why it can swim easily with such a big body.

The Newfoundland breed has large bones and strong muscles to carry its big head and other heavy objects such as fish carts or grown drowned people.

In detail, we can realize that it has small eyes in comparison with its body size, triangular ears with rounded tips, and droopy lips. Hence, its facial expression is usually soft and soulful.

Some colors of Newfoundland

Although black is the main color of this breed, we can see some Newfs with white and black patches (also called Landseer), brown, and grey. Along with its hair color, the hues of eyes vary from black to brown and grey as well.

What Are The Characteristics Of Newfoundland Puppies?

In the Breed Standards, there is no word like “poor temperament or aggression” when talking about Newfoundland puppies.

They are usually described as calm and docile dogs. The puppies can follow the training process easily and retain their habits until they die. Moreover, if you want to train them easily, you could know Best Dog Collar For Pulling – Top 10 You Might Consider.

The Newfoundland is an intelligent and protective guard like the Sable German Shepherd who usually serves in the Army.

Newfs are ideal nannies because they are pretty watchful and patient. However, their big figures may cause trouble for small kids.

Also, they are great companions in therapy for both children and adults, thanks to their loyalty and sweet temper.

How To Care For This Breed?

Although Newfs are not picky in food, we highly recommend following the veterinarian’s suggestions in nutrition. If you want to make homemade food for them, you should receive the approval of the vet first.

A big note for you, each period of the dog’s life needs a different diet. Over-calorie consumption leads to overweight or obesity and other health problems for your dog.

As a puppy, Newfoundland should consume 22% to 24% of protein and 12% to 15% of fat in their meals. Whilst, 18% to 20% of protein with 5% of fat is ideal for a mature dog. Since your Newfoundland gets older, his/her metabolism slows down, so you need to cut off nutrition in the diet.

Besides protein and fat, you need to supply vitamins and minerals to your dog. One of the great ways is to add fruits to their nutrition.

Can dogs eat kiwi? Kiwi is rich in Vitamins C, E, and A and the acid omega-3. However, depending on your newborn’s health, they can or can not consume this type of fruit. You should ask the vet beforehand.

One of the big health problems of the breed is bloat which happens due to a swollen and twisted stomach. To avoid this condition, you should divide their nutrition into multiple and small meals. Also, vigorous activities are unacceptable at mealtimes. Moreover, you could consider other fruits that have more nutrition, such as Pineapple or Strawberry Yogurt.

Newfoundland owns a hairy coat with a long and coarse outside layer and a short and soft inner layer. Hence, you need to brush it with a wide-tooth comb and a slicker brush to smooth the fur and remove dead hair.

How often should you brush your Newf?

While many breeds are seasonal shedding, thick double coat owners such as Newfoundland, English Golden Retriever, or Black Golden Retriever are year-round shedding. Consequently, you need to brush out several times a week, or else your home will be full of hair.

Also, Newfs need frequent nail-cutting, or they get pain and difficulty in walking and running.

Originally, Newfoundland was a working dog who could bear heavy tasks. Even though they become pets and live indoors now, outdoor activities are important for their health and instinct.

Some favorable activities for the breed are swimming, walking, and hiking. You can also join games like flyball with your puppy to increase the affection and loyalty of your Newf. Besides, if you want another cute and loyal dog, you could know more about Bloodhound Puppies or Rottweiler Puppies.

If you want to train your dogs, it’d better start by the age of 4 months. Young Newfs are eager to learn new things and respond to guidance nicely.

However, the breed cannot follow harsh training methods; therefore, be gentle with them. Treats are great to support the training process, but you shouldn’t give them too much. You should make a puppy schedule for better training results.

We suggest sending your dog to a puppy training class where he/she can meet other dogs and professional trainers.

What Are The Top 5 Interesting Facts About This Breed?

Although Newfoundland had been living with humans for years, it wasn’t recognized until 1879 when the American Kennel Club – a registry of purebred god pedigrees registered it as the 32nd breed in the club.

Peter Pan – a fairy tale character, has a dog named Nana. Many people mistake her for a Saint Bernard. In fact, it’s Newfoundland.

#3: Famous quote about the breed

Henry David Thoreau – a famous American author, wrote that “A man is not a good man to me because he will feed me if I should be starving, or warm me if I should be freezing, or pull me out of a ditch if I should ever fall into one. I can find you a Newfoundland dog that will do as much.”

The breed itself is huge with 100 – 150 pounds in average weight. However, the biggest Newf that has been recorded in the world weighed 260 lbs and longed 6 feet from the nose to the tip of the tail.

#5: One of history’s most notable figures

Some Newfoundland dogs had written their name in history. They even get along with some famous people in the world, such as former US President Ulysses S. Grant and Lyndon B. Johnson, explorers Lewis and Clark, and so on.

We will list some famous Newfoundland in the world and their excellence below. Keep reading on to know more.

Do You Know Any Famous Newfoundland Puppies?

Napoleon was an all-black Newf that played the role of star attraction in an English circus since 1862. He could jump against human rivals, leap over high objects such as bars, balloons, and horses from a springboard, and dance to music.

Napoleon and his owner

This Newf was known as a member of the first American journey from the Mississippi River to the Pacific coast. From his owner’s word, Seaman could go swimming and hunt squirrels as food for his crew.

#3: Brumus – the most notorious pet of Robert F. Kennedy

Former President of the United States – Robert F. Kennedy, was an animal lover. He raised many pets, which were most dogs. Among them, Brumus was the most noticeable one.

However, Brumus wasn’t well-known, thanks to her owner. She was prestigious in her nanny job. She usually watched over 11 children of Senator and Mrs. Robert F. Kennedy.

Brumus with Robert Kennedy and his kids

After reading this article, do you want to get a Newfoundland? If you already have one, we hope you can understand your puppies now and give the best care to him/her. We would be glad if you could share your tips for looking after your Newfoundland puppies in particular and dogs in general in the comment section.