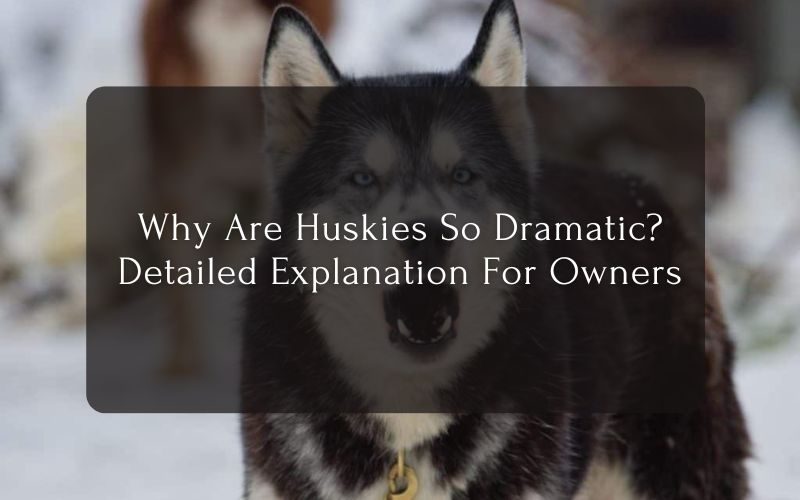 Barking over a close relative, howling when you do not give enough food, or even “crying” loudly after being beaten from a violent battle with other dogs. Do those images familiar to you as an owner of a Husky? Why are huskies so dramatic? The Huskies’ dramatic and goofy behavior makes them so different from other breeds that sometimes you may wonder why huskies always overreact to their environment. This article will provide the necessary information about your overactive Huskies, why they behave like a drama queen in most cases, and some valuable tips for you in taming Huskies.

What Are The Behaviors of Dramatic Huskies?

Huskies are dramatic with a combination of genetic characteristics and human feedback. Huskies are genetically prone to communicate when they do not really want to do something or strongly feel something. However, because owners usually praise this dramatic behavior with attention, huskies show it more frequently. But that’s not all.

How your dog is raised and trained can influence how they react to situations—how you train your Huskies and respond to their surroundings. So, the first rule of training a Husky is to be dedicated and enthusiastic and to stick to a clear plan of taming. Furthermore, their personality heavily influences the type of reactive behavior they exhibit. Here are some common dramatic behaviors noticed in various huskies below. Let’s check them out!

Huskies’ behaviors resemble how wolves communicate in their natural habitat because they are descended from them. As a result, the most common signs of huskies expressing their feelings – love or hate – are barking, chirping, or yowling. As a result, it is common to believe that you are living with a wolf because they only howl like them. Huskies are extremely sensitive, so they require special attention and love. They could be howling to get your attention or describe their fear of something or someone. Soft and slow howling, on the other hand, usually expresses their happiness and love for you.

Besides barking, chirping, or yowling, husky dogs frequently whine and usually do it to share information with others, particularly during intercommunication. The whining sound is typically high-pitched and similar to crying, but they are not crying; dogs pace when anxious, in pain, or in discomfort. As a result, Huskies typically begin walking when they become impatient or irritated for whatever reason.

Some husky dogs even stare at their owners; this could be their way of asking you to play and give them some attention.

This cause may make you laugh the most because of how your “drama queen” is attempting to get your attention. Huskies are regarded as the most intelligent breed of dog, making spending time with them and watching them play their own game enjoyable. However, Huskies can become aggressive and crave attention if they do not receive it. Huskies usually pretend to die if they refuse to obey your command. This is unusual in any other dog breed because no different breed has the intelligence of a husky. However, it also assists Huskies in gaining your love, most amusingly.

If your Husky is an adult throwing tantrum or acting like a stubborn child, it could be a sign that they need basic needs, such as going to the bathroom. You should not ignore this signal because most trained huskies will give it if they need to go outside. They can even do this to obtain their favorite toy or food. Or perhaps, your huskies want to be cuddled. Whatever their behavior, you should understand why you own the dog. Understanding the cause of their childish tantrum can quickly calm them down.

How Dramatic Are Huskies?

When husky owners refer to their dogs as “the drama queens of the dog world,”. They usually mean the loud and theatrical ways that huskies communicate when they don’t get their way. Although the details of these “husky tantrums” differ from dog to dog, it is critical to distinguish them from genuinely problematic behaviors.

What Gives Huskies Their Dramatic and Strange Behavior?

Huskies are very talkative dogs in many ways. For starters, they frequently vocalize, emitting barks, yips, howls, whines, and even the occasional purr. To “talk,” many huskies famously mimic human tonal patterns.

The desire to communicate through sound stems from nearly 10,000 years of sled dog use in Siberia. Huskies rely on howling and whining about coordinating with one another, whether on the long relay trips that made huskies famous or on a short daily sled ride.

Even household huskies have a strong tendency to communicate audibly with their pack. Play a role as a member of their pack, a husky’s owner is approached whenever a husky is upset about anything. You can expect an earful if you ask a husky to do something it doesn’t want to do!

Furthermore, centuries of breeding to run for hours on end would make any breed a little hyperactive. The average Husky has a lot of energy and needs a lot of exercises, whether it’s long walks, digging holes, or vigorous fetch games.

With all this extra energy, a husky can put in a lot of effort to throw a dramatic tantrum. Furthermore, a high-energy breed that does not getting enough exercise is prone to becoming fed up, frustrated, and elevated.

The Wild And Strong Instinct Of Their Ancestors

Following some reliable evidence, Huskies are the most vocal dogs in the world, according to scientific evidence. It is common to be seen as barking and howling because they are a pack of dogs who have been taught to communicate for survival. Huskies are given their DNA and origins; it is common for them to be overly vocal compared to other domestic animals. That’s why Huskies tend to express themselves mainly through barking and howling, sometimes becoming loud and dramatic alike, more considerable than other breeds.

Almost every dog becomes vocal when happy, but huskies become even more vocal when delighted. You couldn’t as a husky owner because they become highly vocal while playing with you and eating their favorite food. If you talk to them and pay too much attention, they will express their happiness by becoming vocal and jumping.

Besides, if you have a husky as a pet, you may be surprised to learn that they can become vocal when in pain. Instead, they howl, crawl, and bark to alert you to their plight. Huskies typically begin panting in pain, which is the most common signal. Panting is undoubtedly a sign of pain if the environment is not too hot and they have not engaged in strenuous exercise.

On the other hand, that’s how they rebel against their owner. Their stubborn and complicated personalities could be hard to train. If they are unwilling to do something but you keep engaging them in the activity, they will eventually start talking. They discussed avoiding the activity in which they were uninterested and wishing to avoid it entirely. This way, they wholly and openly defy their owner, which can sometimes be amusing. However, such behavior should not be encouraged because it will become habitual.

The influence of us responding to their reaction

Most husky owners are amused by their husky’s caterwauls in some way. Whether you respond to your husky, as I do, or laugh it off, dogs are acutely aware that something makes us happy. Many huskies believe that throwing a temper tantrum allows them to express their frustration, postpone obedience, and make their humans laugh!

Lots of s will act “dramatic” based on their owners’ cues if the behavior is reinforced enough. And that’s when you start to get annoyed by their actions.

How To Make My Husky Less Dramatic?

Try Not To Encourage The Behavior Positively.

Praising your dog is more than just saying “good dog” and giving them a treat; there are numerous ways to intentionally or unintentionally reward a behavior.

Giving in is an easy way to reward a husky for its tantrums. If your husky fails to require you something, and you give in even though you cannot do it well after they whine and howl, they will try the again next time. As a result, your husky may learn that the louder and more dramatic their protests, the better their chances of getting hired.

It may appear counterintuitive, but getting angry at your dog is another way to reinforce the behavior. A bored husky may find yelling and fussing entertaining, and a lonely husky may crave any attention.

Giving your husky plenty of love and attention when they are behaving well in the first place and not giving in to their tantrums is the key to keeping your dog happy and calm.

Desensitize Them To Triggers

If your Husky’s dramatic behavior is caused by anxiety or fear, desensitizing them to their triggers is just as essential for their health as yours. As a result, desensitization and counter-conditioning are two essential methods for teaching your dog that whatever they are afraid of isn’t scary.

Dog owners often successfully use these methods on their own with other teaching methods with strict rules, but with this reactive breed, consulting a certified dog trainer can be beneficial.

Huskies are highly active dogs who require regular exercise to stay fit and healthy. As a result, they must begin an exercise routine of at least 3 hours per day. That could make them tired, and they would sleep easily at night, preventing them from howling. You can even have them as a company on your morning jogging routine. However, this would tire them out, and they would remain calm while you were at work.

When Should You Be Concerned About Your Husky’s Dramatic Behavior?

The dramatic behavior of a husky is already said to be in their DNA and is entirely normal. You should not be concerned if they are playful, active, and occasionally howl.

However, if you notice that they are becoming increasingly aggressive and disobeying you, you must intervene. It could be hazardous to you and those who live with you in your home. Huskies can become wild if they are not adequately trained, making them impossible to handle. Hopefully, the above tips and tricks will assist you.

If none of the suggestions help, please seek advice from your local veterinarian or canine professionals. Huskies are energetic and playful but require constant attention and care, love, and a safe environment from owners or family members.

Is Your Husky’s Drama That Bad?

No, it does not. When on the lead, the most common problem that dog owners face is their dog being reactive. When dogs are close to another dog or a stranger, they become aggressive. Most people believe that this type of reactivity is more severe than the typical huskies household drama, which can make you feel uneasy for the majority of the training time.

If you don’t want to tolerate silly behavior from your husky, start implementing strict training and make sure you’re never positively reinforcing their drama.

After all, remember that every dog is unique, making them unique and adorable. The bold personality and character they bring to your home distinguish a Husky from a fake Husky. So, do you want to prevent your Huskies from exhibiting their natural characteristics, to rephrase?

Whereas every dog is unique, most husky owners will agree that their dogs are drama queens. Because of their naturally vocal, stubborn, and expressive personalities, huskies exhibit exaggerated behavior. This, combines with how people interact with them, affects amusingly dramatic tantrums.

Why Are Huskies So Dramatic? This expressive, vocal breed is not for everyone, but their theatrical personalities are adored by many. Like any other breed, Huskies make wonderful pets if you give them the love, attention, and exercise they need. So, love your Huskies with your wholehearted love and care if you respect their uniqueness and differences!