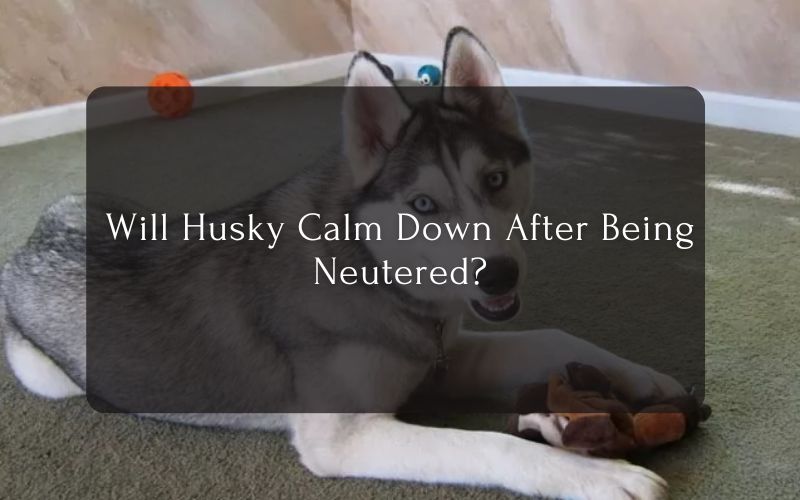 Regarding family dogs, you definitely can not miss out on the Huskies. It is a breed of working dog raised in Siberia by the indigenous Chukchi people. They needed animals capable of hauling sleds, hunting, and keeping their children entertained. That is why this gorgeous and gentle dog is the ideal companion to all those who like primitive breeds, as it remains the closest breed to the wolf.

Will Husky calm down after being neutered? Neutering is a safe and quick medical procedure for dogs with few complications, and it won’t affect your dog’s personality. Although huskies are harmless and friendly towards everyone, there are still cases when they are highly energetic and need neutering to help them mellow out.

Huskies have a reputation for being destructive and difficult to house-train. Poodles are known to be more of the food-loving variety, while many huskies tend to destroy things and hide in them, sometimes becoming wedged there. When it comes time for housetraining, they need a lot of attention during this process since they don’t care much about instructions or schedules. Besides, huskies are very strong-willed; if you don’t treat them right, they can be aggressive. They love to play with other dogs and are always looking for an excuse to pick fights with them. They are also very territorial and ready to attack any dog that comes too close to their territory.

Huskies are ranked as one of the most hyperactive breeds of dogs. It is because huskies were bred to work hard in cold climates and have plenty of energy to help them survive and function. As a result, many huskies get neutered when they are young to calm them down and reduce their energy level in today’s life.

Reasons Why Your Husky Hasn’t Calmed Down

The reason why your Husky is acting in such an energetic way could be because it is looking for attention from you. It is normal behavior for a family dog. If the Huskies do not get enough attention and affection from their owners, they will behave unusually to seek it. However, remember not to react to your husky when it starts behaving crazily. Because it probably causes the dog to develop a habit of behaving that way to get your attention. Therefore, instead of giving them attention when they act energetically, you can try and pay attention when your Husky is obedient.

A new place could be what has been causing the energetic behavior. Moving to a new environment can be a significant event for huskies since they won’t know what is happening around them, and there will be many new distractions. For example, if you put them in a swimming pool, you should always be around them and know whether huskies like swimming and water.

Huskies often calm down gradually as they get older. However, they can remain highly energetic by nature when they are adults.

Your Actions Are Encouraging It To Behave That Way

It might be hard to realize, but some of your reactions inadvertently encourage your husky to behave hyperactively. For example, if you give your dog what it wants to calm it down, it will gradually form a habit of acting that way to get what it wants. Giving your husky a treat to calm it down is an easy but short-term solution. Instead, it would be best to teach them to be more obedient by using positive reinforcement training, which will be effective in the long run. You could start by rewarding your Husky for making small steps towards doing something that you want it to do. For example, if you tell your husky to sit while you are cooking, and it does, you should reward it. You should train them in some light activities or know how fast huskies can run and how much exercise a husky needs.

On the other hand, punishment is also the root of this behavior. Huskies tend to think that they are punished for the last thing they did. As a result, it will cause a lot of misunderstanding between the husky and its owner. For instance, when you punish your dog for running away, it will likely think you are punishing them for coming back to you because it is the last thing it did. Therefore, positive reinforcement training is the best option.

Neutering (also known as castration) is the common term used to describe the surgical procedure of removing both testicles and castrating the dog. This procedure reduces testosterone production, stopping the male dogs from performing their duties and making them less aggressive. It is a relatively simple procedure, taking only ten minutes. The incision site will heal quickly within several days with no bandages or dressings needed to keep it clean or wrapped until it is healed completely. Therefore, neutering is usually recommended for male dogs.

At What Age Should You Neuter Your Husky?

Will Neutering Calm Your Husky Down?

One of the most asked questions is whether neutering a husky will calm him down. There is no definitive answer since every Husky is different and will react differently to neutering. Some may become more easygoing and less reactive, while others become more anxious and territorial. It is vital to dig into your Husky’s personality before coming to a decision. If you are unsure if neutering is the right step for your husky, you can consult with a veterinarian or a dog specialist. Moreover, Huskies are friendly dogs, so you can show affection to them because they like to cuddle, reducing the fear of neutering.

Huskies are typically friendly and playful dogs when they are young, but as they get older, they may mellow out. However, not all of them will calm down when they become adults. Some could remain hyperactive for several reasons, which as when you get your husky neutered. Usually, huskies become more obedient and less aggressive after being neutered, but some could be aggressive. Therefore, please check your husky’s conditions with a vet before deciding. I hope the article “Will husky calm down after being neutered?” is helpful.