There are many types of dog breed worldwide, and each kind is famous for its unique features. For example, Dalmatia​n puppies are well-known for their special white-with-black-dot skin, while Samoyed puppies stand out because of their fluffy and snow-white coat, and so on.

When thinking of Belgian Malinois, we will have an impression of a dog breed that often shows up in action movies as professional forces’ dogs. Before deciding to bring a Belgian Malinois home, you need to check out these common questions about it.

What Is The Origin Of Belgian Malinois?

Belgian Malinois is spelled (Mal-in-wah). According to dog experts and reputable breeders, Malinois has its roots from Malines city in Belgium’s Northwestern region. They also reckon that this dog breed’s ancestors are the Belgian Herding Dog Breeds due to some close relations. 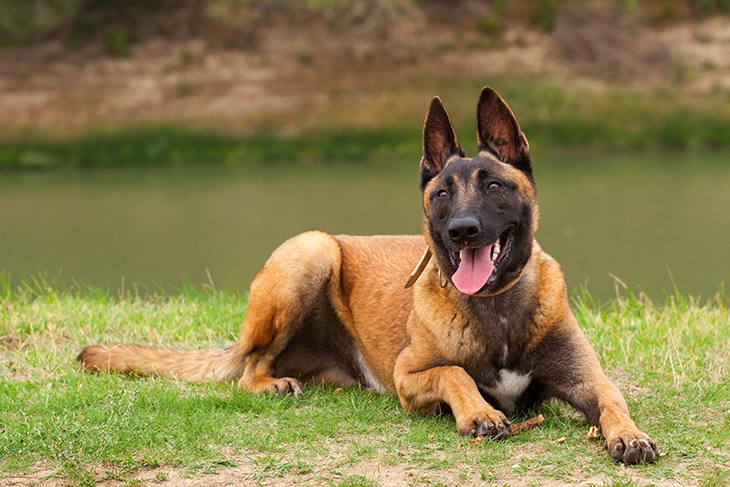 At a glance, you can’t tell a Belgian Malinois and a long-haired German shepherd apart. However, if you have a closer look, you can see that Mals is a separate dog breed.

Malinois’s head is thinner, and his body is slimmer than a German shepherd. The most obvious difference between these two dog breeds is their snouts. A Malinois dog has a black snout, whereas the German dog doesn’t.

Long ago, the native in Malines took advantage of Malinois to herd their livestock. Therefore, Malinois was bred to serve tough farming tasks. He is an excellent side-kick for farmers to complete their jobs instead of being a fancy home dog.

At present, in the United States, people adopt Belgian Malinois mainly for military purposes. You can easily notice the image of a Malinois in a professional police dogs costume in real life or movies. The blockbuster “John Wick 3” also cast a real Malinois as the main character’s friend to deal with villains.

Do Belgian Malinois Have Health Issues?

Despite being powerful guard dogs specializing in performing military activities, Belgian Malinois can’t escape from poor health conditions. There are some common health problems of Malinois you should pay attention to if you are going to adopt one. 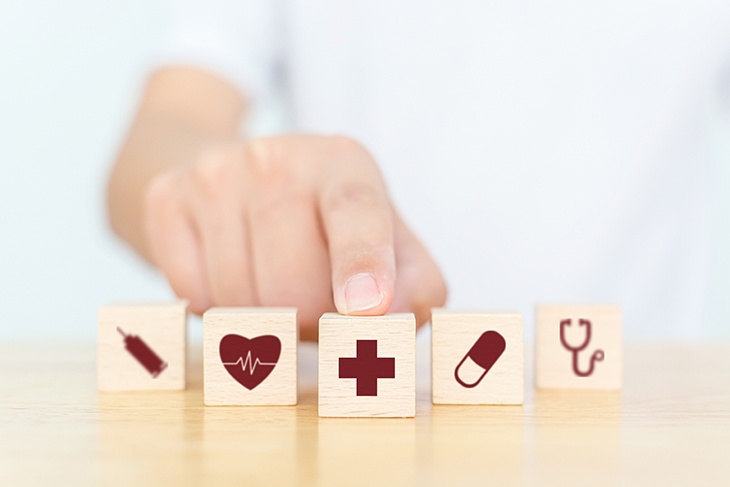 Dental problems can be seen as the most persistent disease to any pet, let alone a dog. Especially, the Malinois’s risk of getting a decaying tooth is greater than any other dog breed. At the age of two, almost every Belgian Malinois will face dental-related diseases due to the excessive formation of tartar.

If the dental problems are not treated properly, there will be many dangerous threats to your dog’s health. Firstly, he will lose his teeth and have difficulty in biting. Hence, he must swallow food without chewing. This situation can cause severe damage to your Malinois’s liver, kidney, and bones in the long run.

Once the dental disease occurs, it is challenging to cure, so prevention is crucial. It would help if you used a special dog’s toothpaste to clean your four-legged friend’s teeth weekly.

This health issue seems hilarious. But, YES, an energetic and active dog breed like Belgian Malinois can get overweight like other dogs. We understand your affection to treat your buddy with food whenever he does something right.

However, the excessive amount of food-intaking may surpass the energy consumed in daily exercise. And your Malinois will become obese as a result.

This health condition often causes joint problems, disorder, and malfunction of organs, back pain, etc. Therefore, instead of treating your pal with food, you should rely on other praising methods like brushing his fur or taking him to the park.

Since your four-legged friend always wants to indulge himself in rolling over the grass and some muddy spots, the risk of getting health concerns like dangerous and exotic parasites is inevitable.

Dogs’ ears and skins are the most vulnerable external parts to parasites as they are often attacked by ear mites, ticks, and fleas.

Exotic viruses can penetrate the interior of your Belgian Malinois through contaminated water the dog drinks, the contaminated soil he plays on, or a bite of a mosquito. These parasites are heartworms, hookworms, whipworms, and so on.

Scientists warn that the internal parasites are much more dangerous than the outside ones. The reason is that they can also infect us when we play with our puppies.

To prevent the parasites from harming your Belgian Malinois, you should have your puppy injected with vaccines annually. Besides, if you want to avoid being infected by your dog’s parasites, you need to wash your hand with hand sanitizer after playing with them.

Dogs, especially Belgian Malinois puppies, are playful, and they always want to explore the world with their eyes. Hence, it would be a miserable situation if your Malinois lost its eye-sight. Unfortunately, the Malinois’s genetic inheritance sometimes results in eye problems.

The most severe and common eye problem of Malinois is cataract. This disease will form a cloudy layer on the pupil of the eye and cause limited eye-sight.

Somehow, several Malinois can minimize the effect of cataracts on their eyes without operation. However, the highly-recommended solution to cataracts is taking your puppies to the vet for surgery.

How To Keep Your Belgian Malinois Happy? 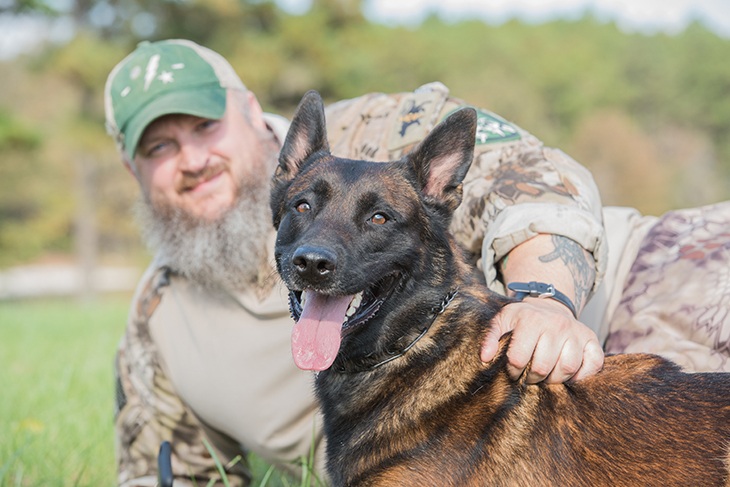 Belgian malinois dog being held by his partner that is blurred

The foremost factor to make your dog happy is to offer him a close companionship. Dogs are well-known for their loyalty, so they always want to spend time with their owners, and a Belgian Malinois is not an exception. Your four-legged friend is willing to share every moment with you.

Besides, the Mals will feel depressed and have negative feelings if left alone for too long. The loneliness can cause misbehavior and improper characteristics like anxiety or messing up the stuff in your house.

Hence, you should take more time to develop the solidarity between you and your Malinois. Even if you can’t take them out for outdoor activities, you can “spoil” your buddy with appropriate treats at home. 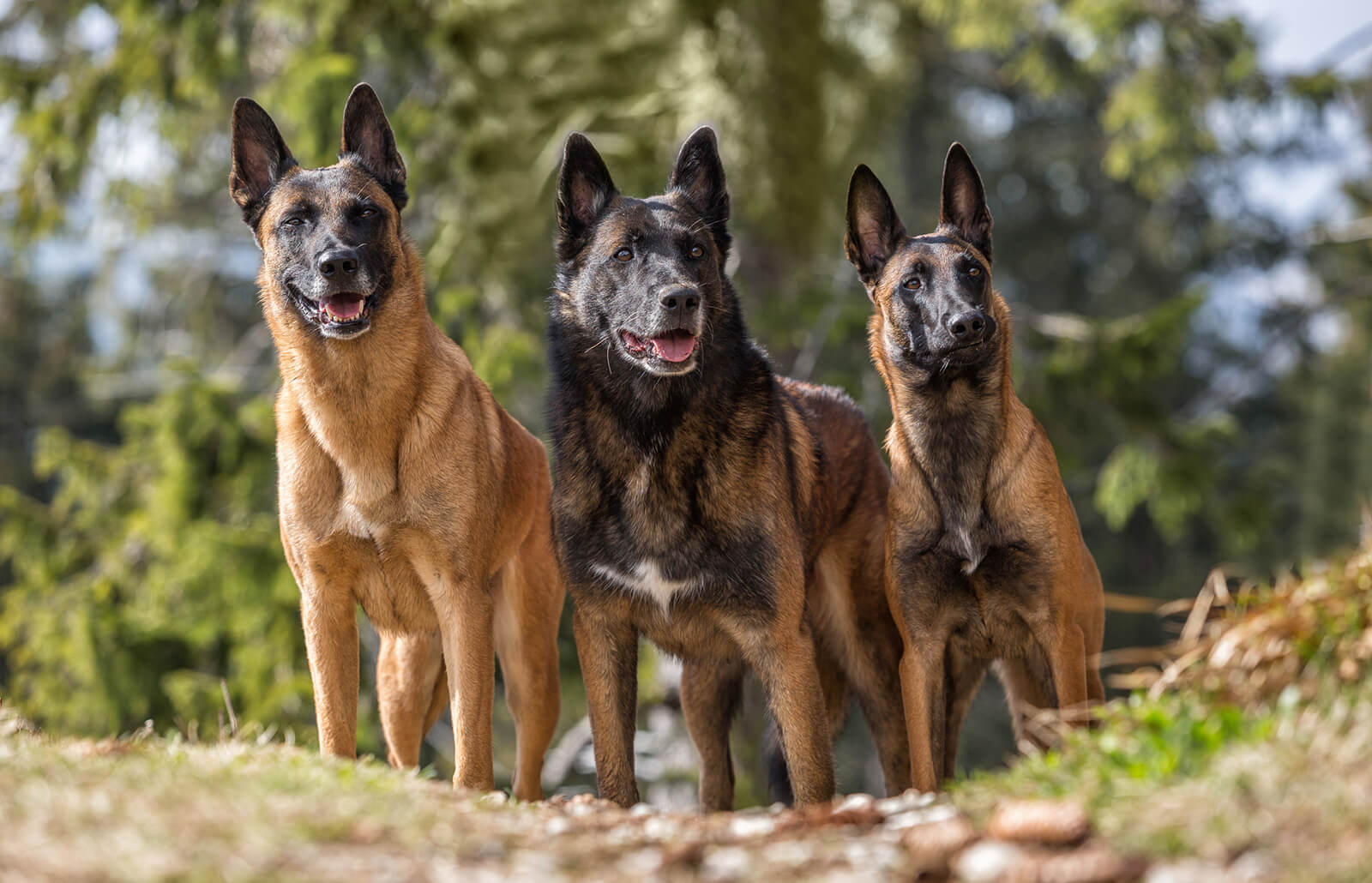 Mals is a suitable friend for adventurer.

Formerly, in the native land, people took advantage of Belgian Malinois to herd their livestock, but now things have changed. Mals is usually bred for serving in military forces or being a family dog. No matter the purposes people raise Malinois for, this dog breed’s stamina and activeness remain the same.

For this reason, Malinois puppies are interested in physical exercise to release the energy. If you are afraid that living in an apartment will not provide enough space for your Malinois, you can take them to the park for a walk. Honestly, an ideal living condition for a Manilois is a house with a playground for him.

Since Malinois is favorable for being a police dog or guard dog, his intelligence and bravery are highly regarded. Thus, it is good to opt for this dog breed to accompany you on adventurous journeys.

What Food Your Malinois Mustn’t Eat? 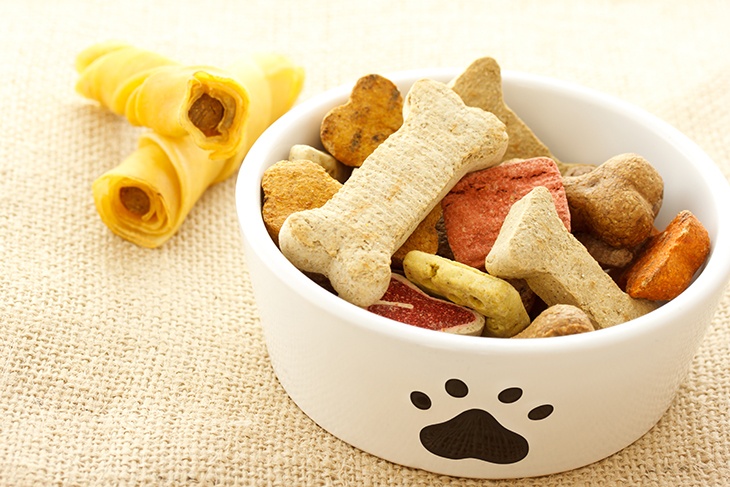 As a matter of fact, our puppies enjoy almost every type of food we eat daily. Yet, in some cases, your Malinois may get poisoned because of unsuitable food. We will provide you with some inappropriate food for dogs so that you can both treat your pal and keep him healthy:

It is quite surprising to know that a human’s favorite and common food can cause deadly consequences for puppies. When Malinois eats chocolate, the food will form a chemical called bromine.

Once the bromine spreads in the blood of dogs, it results in intoxication. Then, your Malinois will have problems in the heart, nervous system, and digestion system simultaneously. The pace of chocolate’s effect on dogs will depend on their size, weight, age and the cocoa concentration in each kind of chocolate.

Within 6 to 12 hours after your Mals consume the chocolate, the poison signs will begin to occur. Your Belgian dog becomes hyperactive along with uncontrollable urination and muscular spasms.

You have to immediately take him to the nearest vet for an emergency remedy; any second wasted will minimize the chance of saving your pal. Remember that about 50 grams of chocolate can take away a 22-pound dog’s life.

In many countries, especially Asian ones, people tend to feed their dogs with chicken or pig bones. They assume that consuming these types of food will increase the calcium in a dog’s bones.

However, this is an inaccurate consumption as eating bones can bring many dangerous consequences. Although Belgian Malinois puppies also enjoy eating bones, you shouldn’t let them take too much of this food. If the bones aren’t broken into small pieces, they can destroy his intestine when swallowed.

Furthermore, the bones’ fragments with sharp edges can do harm to your dog’s mouth and other organs. When the sharp bones are stuck in your Malinois’s mouth, you need to take them out as soon as possible. Or else, the fragment may lead to infection and an unpleasant smell.

In case the Malinois still fancies bones as a treat, you should boil the bones well before giving them to your pal.

Food that contains a huge amount of fat is harmful to humans’ health and the Malinois’s well-being. Although fat food is delicious, it is the most obvious cause of obesity.

When your Belgian buddy takes a redundant amount of this type of food, he will gain more weight. It is a joy to have fluffy and chubby puppies. Yet, you need to think about the health concerns the Malinois may get, such as the inability to move smoothly, the frequent tiredness, and the excessive body heat.

Some fruits that are safe to consume by humans but fatal to dogs:

Belgian Malinois is famous for its strength, intelligence, and loyalty. For this reason, he can be a perfect buddy for anyone. However, you shouldn’t adopt a Mals, especially a mature one, if you first raise a dog from our point of view.

You need to bear in mind that all the photos and movies about how great and helpful the Malinois is are all about the well-trained ones. Apart from the wonderful characteristics, the Belgian four-legged pal is aggressive and stubborn; he will barely obey anyone but its first trainer.

Therefore, if you want to take a Malinois home as the first dog, it must be a Belgian Malinois puppy. Otherwise, the dog will even attack you in case you don’t treat him well.

Moreover, you should rely on a training program from a professional trainer or a reputable breeder to teach your buddy. Malinois is a quick learner, and he will soon accomplish all the exercise requirements of the trainer.

Belgian Malinois is an excellent dog breed with many outstanding features. You can raise Malinois to become a professional police dog or a family friend.  We hope that our article can provide you with efficient information before you make a decision to bring a Malinois home. Just keep in mind these pieces of information as they can help you a lot in getting on well with your buddy.

Thanesix.com > Breeds > Belgian Malinois – What To Know About This Dog Breed?
Recent Posts